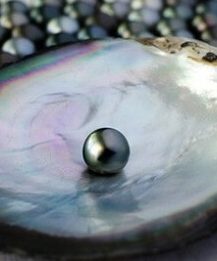 Tahitian pearls are the unique organic gemstones cultured from the Pinctada margaritifera oyster. These are the only pearls in the world that acquire their rich black color naturally. The rich dark color is precisely what adds to the value of Tahitian pearls.

These organic gems add a uniquely dramatic touch to any jewelry staple they are mounted in. Cultured in the French Polynesia, the exotic pearls are meant for the brave. Their style-forward refinement is adored by women worldwide.

Commonly associated with the label ‘black pearls’, Tahitian pearls’ colors vary depending on the nacre. Tahitian black pearls are deemed the most valuable on the market. A Tahitian pearl flaunting a perfect rich black nacre is certainly more valuable than a Tahitian gray pearl. Nonetheless, all are uniquely beautiful and make ideal gifts for anniversaries, weddings, ceremonies or birthdays.

Few know that these exquisite gems do not in fact come from Tahiti. Their name is indeed given by the main trading post for Tahitian pearls, yet the fragile gemstones are in fact farmed in the Cook Islands, the Micronesian Islands and most of all, French Polynesia.

While Japan, the Philippines, and Thailand have in recent years began farming black-lipped oyster pearls, it is only those pearls farmed in the French Polynesia that are called Tahitian pearls.

One interesting fact about the black-lipped oyster or Pinctada Margaritifera is that it envelops the bead in several types of nacre. This explains why Tahitian pearls aren’t just black, but also mesmerizing shades of silver, chocolatey brown or – rarely – almost white.

If you have ever had your heart set on a Tahitian pearl necklace, you know that its captivating beauty was certainly matched by its price tag. Well, that is another interesting fact about Tahitian pearls. Their price and value are slightly above that of other cultured pearls. That is due to the fact that not only do Tahitian pearls don unique colors, but they also come in unique sizes.

The variety of Pinctada maxima oyster that creates and shelters them can reach up to one foot or above in diameter. As such, Tahitian pearls are slightly larger than other pearls as well. Most Tahitian pearls will grow to be between 8 and 14mm. That is considerably larger than the freshwater pearls for instance.

Tahitian pearls have become some of the most sought-after and expensive pearls in the world. May we add, rightfully so.

We have already mentioned that the exquisite organic gems are some of the most valuable in their world. Yet, few people know the factors that determine the value of Tahitian pearls. Here is a short guide to what makes them unique.

The size and shape of Tahitian pearls

One of the most important features adding to the value and price tag of Tahitian pearls is certainly their size and shape. It is a known fact that pearls rarely grow to 16-18mm diameters. Nonetheless, Tahitian pearls grow into a close range – 8 to 14mm. Their size only adds to their refined and elegant tone, while contributing to the enhanced glow of the black-lip oyster pearls.

Their shape is also a key factor in understanding the value of these pearls. A Tahitian black pearl necklace requires hours or even days of painstaking work. Perfectly spherical black pearls aren’t so easy to come by, despite Tahitian pearls being cultured around a beaded nucleus. As such, finding Tahitian black pearls that are almost perfectly rounded and glow in similar hues is hard work. The more spherical the pearl, the higher its value.

Nonetheless, there are jewelers and jewelry designers who seek the less perfect Tahitian pearls precisely for their flaws. They are indeed unique, as each groove or circle offers a certain individuality to the gems.

The color and luster of Tahitian pearls

In addition to size and shape, color plays one of the key roles in establishing the value of a Tahitian pearl. There are three color groups that are officially recognized in the Tahitian pearl trade: green yellow to yellow green, peacock and black. The latter are the most valuable as well.

Each Tahitian black pearl has a different rich black hue depending on the oyster and the specific factors influencing the farming process. The nacre of a black Tahitian pearl is also a determining factor in how rich the color is.

For Tahitian pearls with creamy colors ranging from silvery tones to light yellow, their hues are rendered by each organic compound in the oyster shell. While the process can be controlled to a certain point, it is nature that creates these organic gems after all.

The luster of Tahitian pearls is quite remarkable. Jewelers recognize it to range from fair to excellent. It is also the guarantee that a Tahitian pearl is original, as there is no artificial process that can replicate the metallic sheen and overtone of Tahitian pearls.

The surface quality of Tahitian pearls

These cultured gemstones are praised for having very few blemishes on the surface. Quite often, you will find black Tahitian pearls without one blemish or spot on the surface. However, if there are spots, they are usually concentrated in one area which is easily hidden by the drill hole or the jewelry mount.

The nacre plays an important role in determining the surface quality. In French Polynesia it is standard that the nacre of Tahitian pearls is a minimum of 0.8 mm in order for these to be sold. As such, this is a good indicator of the Tahitian pearls value.

There is no jewelry with Tahitian pearls that doesn’t lend its elegance and refined beauty to the wearer. You might be tricked into believing that a Tahitian pearl ring or a Tahitian pearl bracelet is only fit for special occasions, gala dinners and luxurious events.

Their perfect luster and elegance does prompt one to hold them as precious jewelry staples to be flaunted only during such occasions. Nonetheless, pearls are perfect at any time of day or evening. With their timeless charm, even the most daringly designed pearl jewelry are the ideal adagio to any outfits.

Wear Tahitian pearl jewelry with your office attire. Their elegance and daring tone will make you feel stylish, confident and unique. Wear your favorite Tahitian black pearl earrings with the casual jeans and white tee outfit. Your strong individual note will not go unnoticed.

Tahitian pearls are the queens of pearls. More discrete than the South Sea golden pearls, yet mesmerizing with their metallic sheen and intriguing overtones or rich black hues, they lend confidence, femininity, and refinement to any outfit you choose.